The Art of William T. Cooper
Presented in Original Size, with accompaning text by Joseph M. Forshaw
A Collectors Edition of 460 Sets
Published: 2001

In 1997 Nokomis Editions published Turacos: A portfolio of all Species. This was the first part of a two-part project aimed at reproducing William T. Cooper’s work to the highest possible publishing standards. We hoped that viewers seeing the plates could imagine themselves looking at a just-completed painting on the easel in Bill’s studio. Cockatoos: A Portfolio of all Species contains twenty-one plates and concludes this two-part project, showing Bill Cooper’s exquisite watercolours once again in full size. His love for cockatoos is obvious and his mastery deserves this elegant presentation. One of Bill’s many artistic strengths is his careful attention to habitats and bird-plant associations, which is sensitively portrayed in each painting. These wonderful birds of the forests and plains have all been painted in landscape format, allowing him to show more diverse compositions and postures.

The accompanying text by Joseph M. Forshaw departs from his usual style and forms an elegant essay interspersed with the plates, along with Bill Cooper’s Artists Notes. The Introduction is written by Stephen Garnett, a leading researcher on Australia’s endangered cockatoos: “As a connoisseur I should be difficult to satisfy. But satisfied I am – to encounter a Portfolio that so effectively transmits the presence of these splendid birds to its viewers is an enormous pleasure. The cockatoos have indeed been fortunate to be the subject of Bill Cooper’s attention at the zenith of his talent, and to have maintained the interest of Joe Forshaw over so many decades”.

The postures and behaviours were dynamic and the habitat settings accurate. Portfolio was a modest success within the Australian ornithological community but the publication ot Parrots of the World in 1973 established his international reputation. Bill Cooper is now recognised as ‘the world’s leading exponent of the Gouldian style of bird illustration’.

He has exhibited at the most prestigious of all wildlife art shows, the Leigh Yawkey Woodson Art Museum in Wisconsin USA, and in 1990 was awarded the Academy of Natural Sciences (USA) Gold Medal for distinction in Natural History Art. This medal is awarded periodically to an artist ‘whose artistic endeavours and life’s work have contributed to man’s better understanding and appreciation of living things’. In 1994 he was awarded the Order of Australia for his contribution to Art and Ornithology. Bill’s wife, Wendy, is the other half of the Cooper research team. Wendy wrote the text to fruits of the Rainforest, 1994, and her botanical expertise has provided important scientific input for both the Turaco and Cockatoo portfolios. They went to Africa in 1995 to observe and do field sketches of turacos and have used the same work pattern in 1998 and 1999 to produce the cockatoo paintings. They travelled over much of Australia to see all the cockatoos in their habitats, from the snow-covered alps in the south to the steamy, tropical rainforests of the north and across the continent to the west coast to find the two white-tailed species and the Western Corella. At Jurong Bird Park in Singapore, Bill was able to see the Indonesian species and make sketches and notes in preparation for the finished work. Bill’s passion for cockatoos goes back to his early years and working on this collection has allowed him to indulge himself in his favourite subjects. 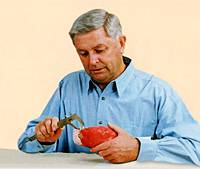 Joseph Forshaw is one of Australia’s foremost ornithologists, and is recognised internationally as a leading expert on parrots. Prior to retirement, he held a senior position with the Australian National Parks and Wildlife Service. He is a Research Associate in the Department of Ornithology at the Australian Museum, Sydney, and is a Corresponding Fellow of the American Ornithologists Union.

In 1977 he was awarded a Queen Elizabeth II Silver Jubilee Medal, and he is currently serving on government advisory committees looking at wildlife conservation issues. It was in the early 1960s, while he was working as a biologist with the CSIRO Division of Wildlife Research in Canberra, that Joe Forshaw turned a lifelong fascination with parrots into a serious academic interest. His efforts were rewarded in 1964, when he was granted a Frank M. Chapman Memorial Fellowship by the American Mtiseum of Natural History, New York, to study specimens of Australian parrots in the Mathews Collection at that institution. Results from his research were incorporated into his first book, Australian Parrots (Lansdowne Press, 1969), which was an immediate success, selling out within a few months and being reprinted three times by 1972. The Forshaw-Cooper partnership was formed in 1969, when Joe met Bill Cooper at an exhibition of bird paintings being held in Canberra. Bill agreed to illustrate Joe’s next and more ambitious project. Parrots of the World, for which Joe was awarded a Churchill Memorial Fellowship in 1971. Publication of Parrots of the World (Lansdowne Editions 1973) forged an outstandingly successful collaboration and friendship between author and artist that has resulted in some of the most important and impressive bird book monographs of the 20th century, and now continues into the 21st h century with this Portfolio of Cockatoos.
There have been three revised editions of Parrots of the World and it was followed by The Birds of Paradise and Bowerbirds (Collins, 1977), which was awarded

an international prize for design and now is highly prized by collectors of fine bird books. A second, revised edition of Australian Parrots, with new paintings by Bill, was published in 1981 in both a prestige, limited edition and as a standard textbook format. Between 1983 and 1994, the six-volume Kingfishers and Related Birds (Lansdowne Editions) was published and arguably is the outstanding achievement of their very special collaboration. Turacos: A Portfolio of all Species, the companion work to this Portfolio, was published in 1997, and Joe presently is finalising his technical text for The Turacos: A Natural History of the Musophagidae, in which the spectacular paintings by Bill will be supplemented with new plates and fine drawings. Cockatoos: A Portfolio of all Species marks yet another marvellous achievement from a masterful partnership.

The Portfolio consists of 21 colour plates and is reproduced in an edition of 460 hand-numbered sets with accompanying text by Joseph M. Forshaw and Introduction by Stephen Garnett. Each painting is reproduced to its original size, which is 750 mm x 570 mm. The Portfolio is presented in a hand-crafted folio box and is gold blocked.

The paper is the same as that used for Turacos, but it is of a lighter colour. As many of the cockatoos are white, the paper colour was carefully chosen to colour-match the artist’s original watercolour paper. The paper is uncoated, archival quality, acid-free, alum- and rosin-free, and elemental chlorine-free, with permanence in excess of 300 years. It has a pH factor above 7.5 with excellent opacity and print qualities and is ideal for high quality art reproduction.

Without doubt William T. Cooper’s watercolours of cockatoos have been printed to the highest standards of technology and craftsmanship available today. The craftsmanship and expertise developed during many months of trials carried out by Show-Ads Omega and PMP Print for the superb reproduction of Turacos is clearly evident in the final result oi Cockatoos. Turacos was awarded a Gold Medal for Limited Editions and Art Reproductions at the Fifteenth Australian Print Awards. Even with the experience of printing Turacos, the Cockatoos in its own way, has been a challenge requiring the experience and knowledge of a dedicated team, taking many months of blending traditional skills with the latest digital technology in graphic prepress to achieve this outstanding final result. Each plate has been printed in six colours and many have fluorescent highlight inks to enhance and capture the vibrancy of the original watercolours. The decision to use fluorescent inks made the printing process technically more difficult as the two inks do not mix easily on paper and care was needed not to ‘drown’ the original inks. We, the publishers, have checked all colour proofs at each stage and have been present for the final printing of each plate. Last minute colour adjustments have been made on the printing press to ensure that each reproduction is faithful to the original work of art.

The portfolio case has been completely redesigned from the one used for the Turacos. It is now a ‘half clam shell’ solander style box which opens completely flat and is more user-friendly, whilst still maintaining the overall look and elegance of Turacos. The box is covered in dark oxford green cloth with a pin grain Morocco finish. The front is gold blocked and the box is lined with a burgundy fine paper stock. All materials used are of archival quality with a colour scheme that complements the rich hues captured in Bill Cooper’s paintings. The boxes have been handcrafted by third-generation bookbinders Abbercrombie Hatch and Sons

Keep up-to-date by subscribing to our free email book lists in over 20 subject categories.